Lots of eye-opening charts that show just how much of an impact the global quarantines have had on economic activity in various sectors.

We are heading into a global economic depression.  Adjust your mindset and subsequent behaviors accordingly.

Save and memorize these two charts – it will come in handy very soon!

Second half of March was the end of retail for many. But some had spiking sales. Brick & mortar department stores will never recover; they were toast before the lockdowns.

By Wolf Richter for WOLF STREET.

Retail sales in March were a doozie. As I pointed out with data on daily sales of new and used vehicles, early March was strong, as consumers were trying to front-run store closures. But then around March 12 sales began to collapse. But not at all stores: Some types of stores such as grocery stores, beverage stores, and general merchandise stores had a booming business. And ecommerce sales exploded. And we’ll go through by category.

The stunningly good, the bad, and the incredibly ugly all averaged out: Total retail sales including at food services and drinking places fell 8.7% in March, from February, and 6.1% from a year ago, to $483 billion seasonally adjusted, the Census Bureau reported today. It was the lowest total since August 2017: 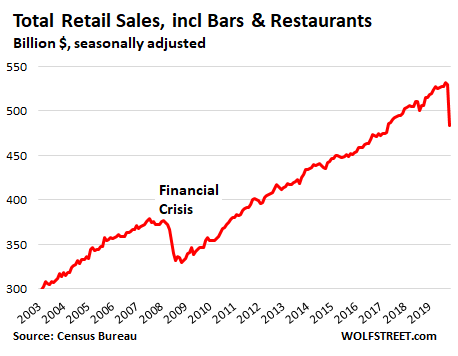 Sales at grocery stores and beverage stores soared by 28% from a year ago to $82 billion in March, seasonally adjusted. Grocery and beverage store sales have been proven “recession proof” – in the chart below, see that barely perceptible down-tick during the Financial Crisis – because people are going to eat, and when things get tough, they might self-medicate a little more with their favorite liquidity. And since then, grocery sales were largely spared the all-out attack of ecommerce.

But this was astonishing, triggered by a mix of panic buying and a shift from consumption to those stores, from restaurants, bars, schools, universities, mall food courts, company cafeterias, and the like. People were still eating and drinking, but they were buying those goodies at the store: 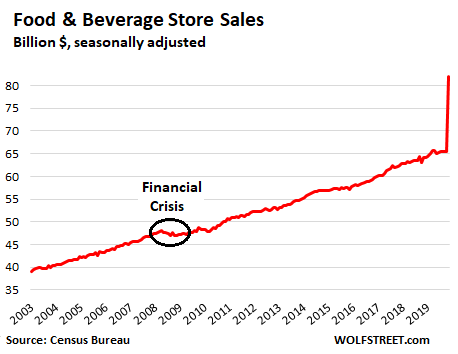 Sales at general merchandise stores jumped 6.7% in March compared to a year ago, to $64 billion. Walmart is in this category, but it’s also the largest grocery retailer in the US: 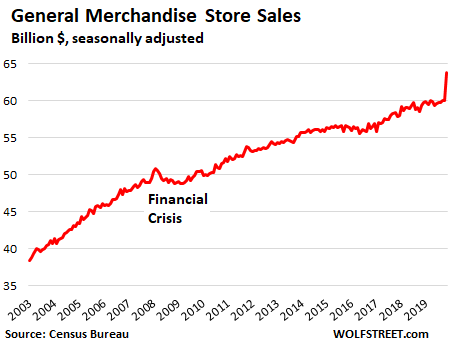 Sales at building materials and garden supply and equipment stores, which includes stores like Home Depot, ticked up 1% in March compared to February – a huge accomplishment these days – and rose 6.9% from March last year, to $33.8 billion, a record: 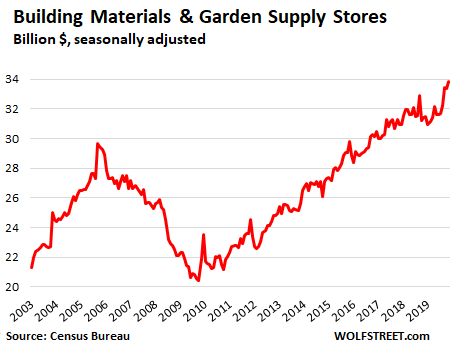 Stores where sales have collapsed

Nordstrom and Macy’s have vibrant and large ecommerce divisions. But their brick and mortar stores – and that’s what we’re talking about here – were in bad shape even before the lockdowns, and to survive, the companies may use this lockdown to close most of their stores and emerge as ecommerce retailers with just a few flagship locations.

Then in March, sales collapsed an additional 24% year-over-year as most department stores shut down in the second half of the month. Brick-and-mortar department stores, as a concept, are dead, obviated by a structural shift in American shopping preferences: 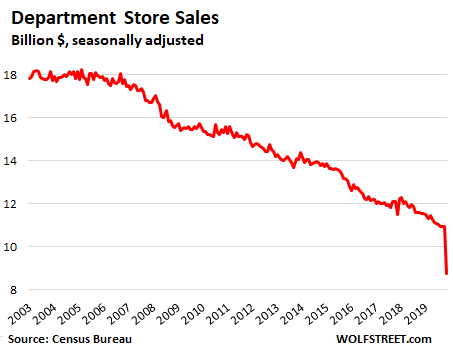 Sales at clothing & accessory stores — which had been essentially been flat for two years as ecommerce made inroads into that space — collapsed by 50% in March to $11 billion, the lowest since 1996: 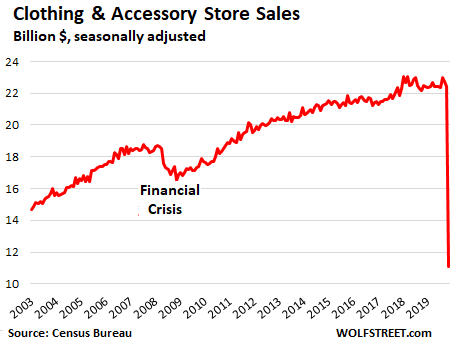 Sales at new & used vehicle dealers and at parts stores plunged in the second half of March, but had been strong through March 12, according to daily sales estimates that I reported a week ago. They started heading lower on March 13, and by April 5, the number of new vehicles sold had plummeted by 65.6% year-over-year, and the number of used vehicles sold had plummeted by 63.5%.

In terms of dollar-sales (not number of vehicles), all averaged out, the strong first half of March and the collapse in the second half, retail sales at new and used vehicle dealers and at parts stores, according to the Census Bureau today, plunged by 26% to $79 billion, the lowest since 2014: 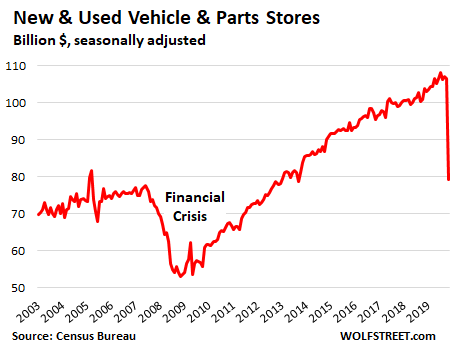 Sales at bars and restaurants collapsed in the second half of March, as lockdowns began cascading across the US. In most states, restaurants from fast-food to high-end dining can now only offer take-out and delivery options. Many sit-down restaurants are trying to get some revenues by offering take-out and delivery, and loyal customers are supporting them that way – but it’s not the same, neither for the restaurants (no alcohol sales) nor for the diners. Bars, which are mainly gathering places, have essentially no place to go.

Sales at these food services and drinking places in March plunged 23% from February and 26% from a year ago, to $48.6 billion: 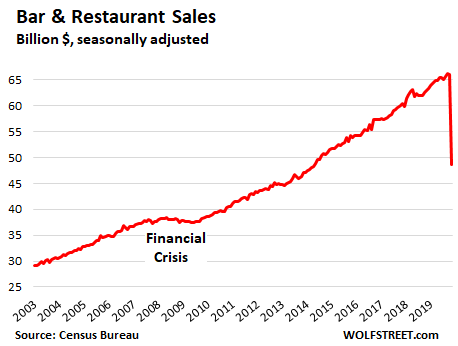 Sales at sporting goods, hobby, book and music stores, which before the lockdowns had already hit levels not seen since 2005 as much of this business has shifted to ecommerce, collapsed by another 23% year-over-year in March, to less than $5 billion: 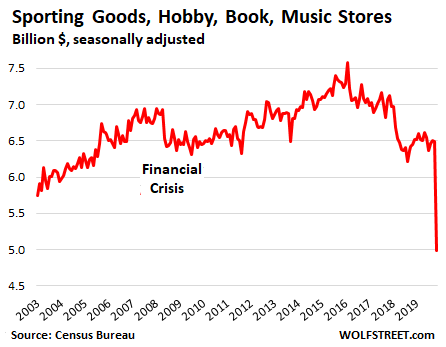 Sales at gas stations – this includes the other stuff that people buy at gas stations, such as junk food or cigarettes, where gas stations make their money – fell 18% in March year-over-year to $35 billion. But this business rises and falls with the very volatile prices of gasoline and diesel, and in 2015-2016, their prices collapsed, hence sales plunged, even as volume sales were maintained.

This time, prices are heading down, though they’re sticky and retail price declines take a while, and the volume of sales has collapsed as commuters drive less. So the decline we’re looking at today is just the first move lower: 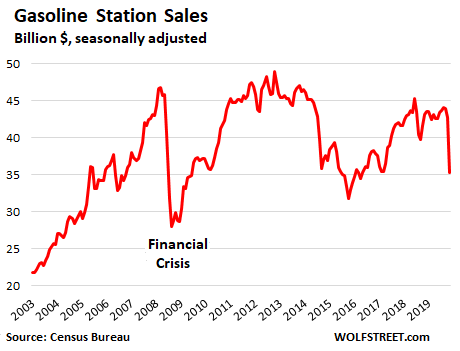 Sales at furniture and home furnishing stores – which had plunged during the Financial Crisis and then spent the next decade trying to reclaim the ground and finally set new highs starting in late 2017 – collapsed from one month to the next by 27% to $7 billion in March, a level first seen in 1999. Much of this business has wandered off to ecommerce, where you can find everything in every color and size, and get it delivered to your door (“minor” assembly required): 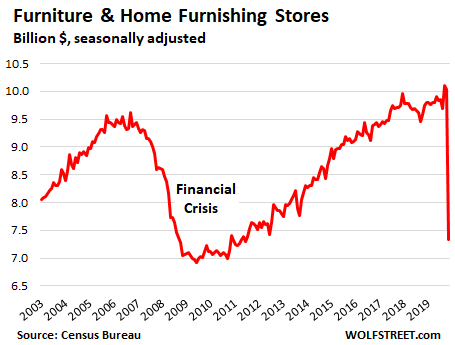 Ecommerce sales are reported only quarterly by the Census Bureau. On a monthly basis, it reports sales by “non-store retailers,” which has some overlap with ecommerce, but also includes fading retail categories such as TV shopping channels, door-to-door sales, and mail-order houses that didn’t make the transition to ecommerce. So “non-store retailers” is not a good stand-in for ecommerce. To get a feel for the boom in ecommerce during the lockdowns, we will have to wait till May 19 when first-quarter ecommerce sales will be released.

There is no chance that this collapse in some sectors, and the boom in ecommerce, will not alter the retail scene permanently, shifting around winners and losers.

In the era of ecommerce, malls have largely outlived their usefulness. This is now becoming clearer as they’re shut down and people are figuring out that they can buy whatever they want, and more easily and often for less, without leaving their home.

“There has been a clear divide between winners and losers.” Read… From Panic-Buying to Lockdowns of Eateries & Manufacturing: Truckers, Railroads Face Supply Chain Turmoil, Spikes & Plunges

Earn bitcoin when you use the Fold app (earn rebates shopping on Amazon!)