Home › blockchain › An In-depth look: “Bitcoin Mining’s Electricity Bill: Is It Worth It?”

An In-depth look: “Bitcoin Mining’s Electricity Bill: Is It Worth It?”

Below the article is some additional food for thought on the topic.

Bitcoin Mining’s Electricity Bill: Is It Worth It?

[Yes]
They say it takes money to make money; in order to make a profit off Bitcoin mining, you have to buy mining equipment and pay your electricity bill first. As more miners join the Bitcoin network, some individuals fear that the amount of electricity consumed by mining will have a negative impact on the environment. Others believe that the benefits of Bitcoin mining outweigh the cost it takes to produce the digital currency.

New Bitcoin are produced through a process called mining, where computers expend energy and computational resources to solve a difficult math problem that verifies a recent block of Bitcoin transactions. The miner who solves the math problem adds the block to the blockchain and receives newly minted Bitcoin. The difficulty of the math problem depends on how much computational power the network has in summation. As the Bitcoin network attracts more miners, the mining difficulty increases, and usually, the amount of energy a mining rig consumes increases too. 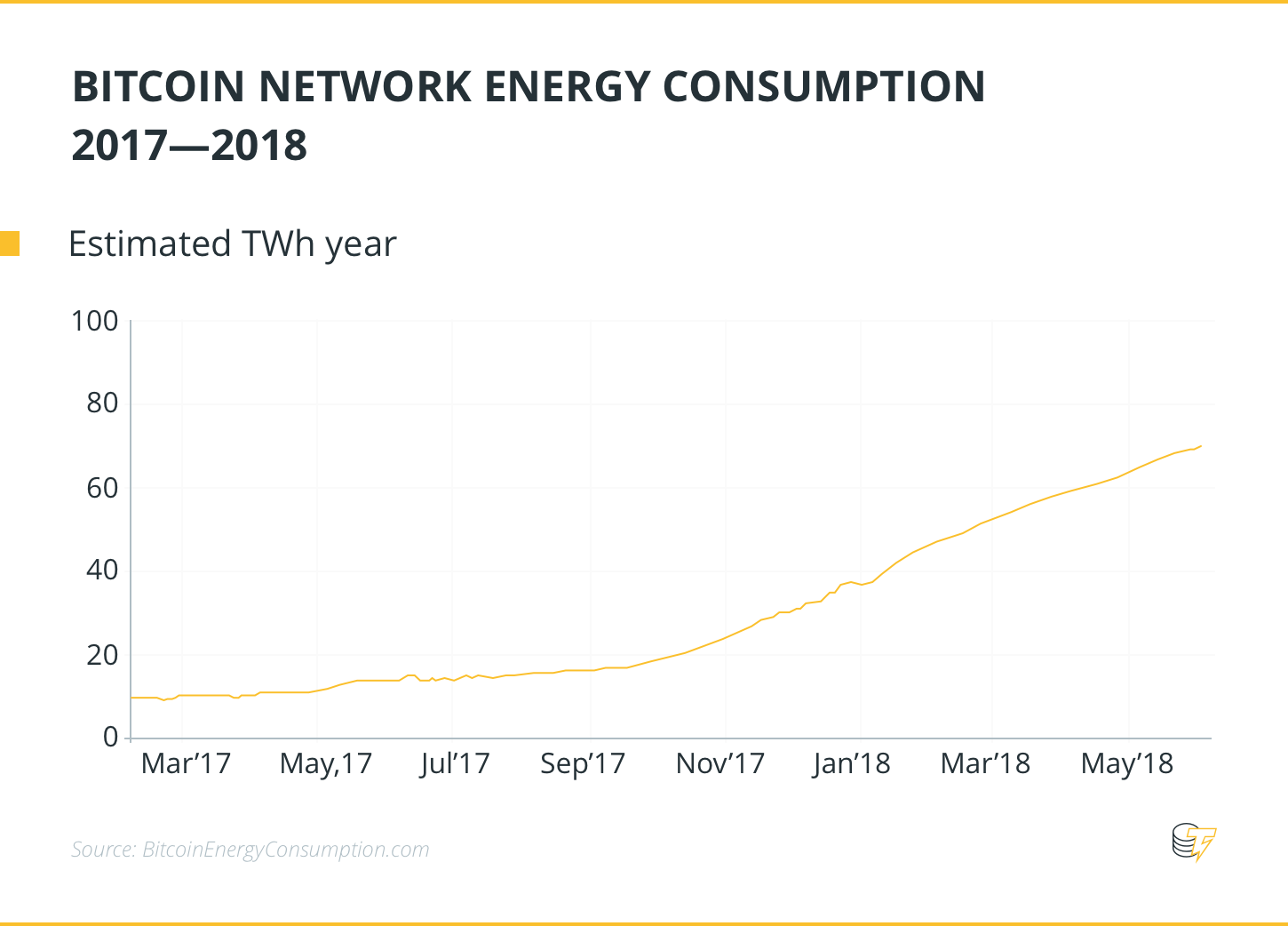 Data consultant and blockchain specialist Alex De Vries believes that the amount of energy Bitcoin mining consumes is problematic. In a recent research study published in Joule, De Vries found that the average amount of electricity consumed per Bitcoin transaction is 300 kwH, and at the rate new miners are joining the network – and the mining difficulty increases – this number has the potential to reach 900 KwH by the end of 2018.

De Vries told Cointelegraph that even though society can not see the changes being made to the environment via Bitcoin mining, mining operations are not helping the world get closer to their climate and environmental goals:

“We know that mining is done with coal-electricity, but also with renewable energy. In the latter case, we don’t know what we are displacing, plus renewable energy never has zero lifetime carbon footprint either. There’s more work to be done here, but there’s certainly an impact. The more energy Bitcoin uses, the more it will impact the environment for sure – which in turn will impact everyone. It’s not helping us reach our climate goals.”

There is a grey area when it comes to figuring out how Bitcoin mining is impacting the environment. Although some of the electricity used is sourced from coal, mining operations usually do not release carbon emissions themselves. Just because miners do not see the physical impact that mining has on the environment, the amount of resources consumed and the opportunity cost involved should be concerning in itself.

The amount of energy mining consumes seems to be increasing. As mining equipment becomes better at solving blocks, the electricity consumed by each mining rig increases. To stay ahead of their competitors, miners are always looking for mining equipment with a higher hashrate. The hashrate is the speed at which the miner is able to provide answers to the math problem. The higher the hash rate, the faster one can guess the answer to the problem. Others, like entrepreneur and former Google information security engineer Marc Bevand, believe that the amount of energy that mining consumes will cause further innovation in the form of renewable energies. Bevand believes that the energy consumption will eventually lead to decreased costs of renewable energy for society at large:

“Because miners are so sensitive to electricity prices, they are often a driver pushing utilities to further develop renewables which are now the cheapest source of energy. For example in China, many miners are located in the Sichuan province because of its abundant hydroelectricity. Another example is an Australian entrepreneur who is building a 20 megawatt (MW) solar-powered mining farm. If the energy use of cryptocurrency miners continue to increase it will help decrease the costs of renewables for society at large (increased demand → increased R&D → increased capacity & higher efficiency → lower costs through economies of scale).”

Electricity costs have already put miners in search for a cheaper source of energy. Companies have been looking to places like Canada and the Sichuan province where electricity is typically cheaper. Because miners have incentives to use cheap electricity, this leads to more R&D in the energy space. In the long run, this should make forms of electricity cheaper to all of society as innovations are made in energy. The Price of Network Security

Although the amount of energy mining operations consume does not go unnoticed, some individuals believe that the benefits of mining – network security – outweigh the negative externalities like electricity consumption.

The Bitcoin network is secured by a consensus algorithm called proof-of-work (PoW). Miners are paid newly minted Bitcoin and transaction fees for solving a block, securing the network in the process. If a miner is not able to solve the cryptographic proof, blocks of transaction history would not be added to the blockchain and blockchain technology as a whole would be nullified; no record of transaction history would be created if blocks were not solved and added to the chain by miners. The cost that has to be paid for this network security is the large amounts of energy that a PoW consensus consumes.

Cypherpunk Jameson Lopp took to twitter to express how he feels about Bitcoin’s energy expenditure problem. Lopp believes that the electricity expense that Bitcoin mining accrues is simply a tax that must be paid for network security.

Whining about the energy expenditure to secure Bitcoin against computational attacks will have no effect. The Bitcoin ecosystem pays contractors (miners) for security; if you want them to stop then you'll have to make a better offer on the open market.

“Higher energy consumption is associated not only with environmental pollution but also with the higher security of a distributed ledger dedicated to storage and transfer of value. I have a strong feeling that this is a temporary situation, and in the future, Bitcoin energy efficiency as a function of transaction volume and energy consumption will increase as a result of Lightning Network adoption.”

“Just look at any other industry, for example, cars or electronic devices – their environment pollution and energy costs considerably decreased over time as these industries developed. So why do people expect high energy efficiency from the Bitcoin in the very beginning? It is only 9 years old.”

But for the most part, these innovations have not officially launched.  Bitcoin is still in its early stages and is not even 10 years old yet, and throughout history, it is not uncommon for technologies to be sub-optimal in their beginning stages.

At the same time, there are people working towards solutions for these network problems. The Ethereum network is looking into proof-of-stake solutions to increase its efficiency while decreasing electricity consumption; the Bitcoin network is looking to implement the Lightning Network. But until these solutions are out of their test net phases and go live, PoW will continue to be criticized for its electricity consumption.

Once the electricity consumption of the Bitcoin network is optimized, the overall efficiency of the Bitcoin network will increase. In an academic paper titled Banking on Blockchain: Costs Savings Thanks to the Blockchain Technology, Luisanna Cocco, Andrea Pinna, and Michele Marchesi from the University of Cagliari’s electrical engineering and computer science departments, found that Bitcoin must increase its economic efficiency, operational efficiency, and service efficiency before it truly optimizes global financial infrastructures.

“In a nutshell, all of our results show that the overall efficiency of the Bitcoin system can increase only after overcoming its main limitations: the low number of transactions per block and the too high computational power that it currently needs”

Bitcoin is useful for its transparent ledger, secure data storage, and user empowerment features, but is going to struggle with mass adoption until it can sort out scalability and energy consumption problems. The total amount of Bitcoin that can ever exist is 21 mln, and as mining rigs consume more energy, miners incur higher electricity bills, and the reward for mining Bitcoin diminishes. Eventually, the profit from Bitcoin mining alone will not be enough to cover the electricity expense. In the future, miners will need to supplement their electricity cost payment with money from the transaction fees they receive for signing a block.

Is the energy expenditure worth it?

Although some people believe that the amount of energy mining consumes is problematic, it is difficult to measure how much of society is benefiting from Bitcoin. Bevand told Cointelegraph:

“Answering “is Bitcoin’s energy consumption worth it?” is very subjective, because we don’t have any hard data measuring how much Bitcoin is helping society. How many Venezuelan are using it to escape inflation? How many families are using it for international remittance and therefore avoiding the average fee of 7.13 percent of remittance providers? How many Bitcoin millionaires given back their newfound wealth to charities? We don’t have much data for any of these questions. I don’t think that the current level of energy consumption is worrisome. We are only at 0.2-0.5 percent of the worldwide electricity consumption. Like Morgan Stanley researchers said in their reports cryptocurrency miners are currently just a “blip on the radar” for utilities”

So far, there is no way for the world to quantitatively measure or know how many people are using Bitcoin, what they are using it for, and if it is making their lives better. But individuals like Bevand and businesses like Morgan Stanley say there’s no need to worry, because Bitcoin mining consumes such a small fraction of the world’s total electricity consumption.

Although we may not be able to see the toll that Bitcoin mining is taking on our environment with the naked eye, there is no doubt that the Bitcoin network will have to reduce its energy consumption before the Bitcoin blockchain undergoes mass adoption. It would not be surprising to see a regulating body create policy and regulation for miners in attempt to control/reduce electricity consumption.

Because Bitcoin miners are so sensitive to the price of electricity, this should push R&D in the energy space and produce more efficient energy solutions. It is hard to get an understanding of the positive vs negatives externalities of Bitcoin, so it is hard to say if the amount of energy consumed is truly “worth it”. But if the amount of electricity consumed by mining is not kept under control or made more efficient, then it is possible that the impact to the environment will be irreversible once people become aware of the negative effects that Bitcoin mining had on it.

As Andreas Antonoupolis recently said: what is the cost of fiat?  The computers, the armored cars, the brick and mortar buidlings and facilities, and all the people to service these things as well as the monitoring of it.

(to get started with cryptos)

Like Loading...
‹ Via the Daily Hodl: “You Can Now Accept Cryptocurrency on Twitch”
Mike Novogratz: “Cryptocurrency Will Become a $20 Trillion Market” ›

If you're new to crypto, Coinbase is the easiest exchange to start with.